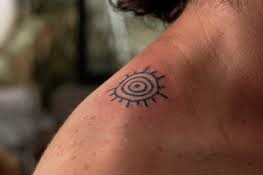 A Stick and Poke tattoo entails manually inserting ink and a single needle into the skin. They involve regularly tapping the skin with a wooden stick that has a needle inserted into the end. A stick and poke tattoo can also take the shape of do-it-yourself tattoos. This type of design is considered simple and minimal, although it can be as complicated as a mere dot or as intricate as a highly detailed artwork. No matter how they look, stick-and-poke tattoos have a more personal, basic feel.
They are renowned for being performed in prison and frequently by amateurs since they can be performed without a needle but can be done with any sharp, thin object. Sometimes even when professionals apply them, hand-poked tattoos almost always seem unprofessional due to the poking. They lack the elegance of a standard tattoo. However, stick-and-poke tattoos can be incredibly distinctive and exceptional when created by a qualified tattoo artist.
How To Remove A Stick and Poke Tattoo At Home?
Although stick and poke tattoos can be applied at home, it is not possible to remove them there, and even if you tried, it wouldn’t be safe. Many people who have stick and poke tattoos think they can remove them safely and successfully at home using at-home tattoo removal methods. But that’s not possible, and you shouldn’t attempt this. They cannot be removed with tattoo removal lotions, lemon concentrates, dermabrasion, or other tattoo removal techniques.
How To Fade A Stick and Poke Tattoo At Home?
Your stick and poke tattoo won’t fade by the DIY home remedies you’ve read or heard about. You may believe that it is “fading” because of the scar tissue that forms on your dermis, but you are only harming your skin. You will waste time and money on ineffective treatment if you try to employ home remedies, which could also result in dangerous side effects and skin damage. Scarring, blistering, and infections are a few side effects of home tattoo removal techniques.
How To Remove a Stick and Poke Tattoo Quickly
Only visiting a professional laser tattoo removal clinic like ours will allow you to completely fade and erase your stick and poke tattoo with a safe and efficient Picosure laser. For your removal requirements, laser tattoo removal is the best option. It would help if you first discussed with your dermatologist to understand why laser tattoo removal is the safest and most effective option for you. Tattoo removal alternatives are hazardous and ineffective, according to the FDA.
FAQs on stick and poke tattoos
1. Is a stick and poke tattoo permanent?
Stick-and-poke tattoos are thought to be temporary and susceptible to fading. This isn’t accurate, though. A stick-and-poke tattoo is created using the same methods as conventional, machine-done tattoos. Like traditional tattooing, a needle injects ink into the skin’s dermis layer. However, the lifetime of the hand-poked ink can be significantly impacted because the technique used for these tattoos is less advanced than that of a tattoo machine. However, many people unaware of the permanence of stick and poke tattoos are misled by the notion that they are transitory. They won’t vanish as quickly as most people believe.
2. Does a stick and poke tattoo hurt?
A stick-and-poke tattoo hurt differently for everyone depending on where they are placed, how they are designed, and how much they can take the pain. Some believe the pain isn’t as awful as machine tattooing, while others believe it is. It all depends on your tolerance level, whether you want one needle piercing the skin reasonably slowly or many needles puncturing the skin swiftly.
3. How long do stick and poke tattoos last?
A stick-and-poke tattoo won’t last you a lifetime. That much is certain. As we’ve already established, the hand-poking method is less sophisticated than traditional tattooing. Therefore, the hand-poking may cause the ink to be improperly positioned in the skin and reduce the tattoo’s overall longevity compared to a conventional tattoo. Stick and poke tattoos will typically endure between 5-10 years. A hand-poked tattoo can endure up to 10 years if applied by a qualified tattoo artist and cared for correctly afterward. However, it might only last five years if a novice or inexperienced tattooist applies it.
4. Does a Stick-and-Poke Tattoo fade over time?
Hand-poked tattoos typically fade away and lose their original appearance after a few years, which is one of its most significant drawbacks. This is due to how the ink was applied to the skin or the absence of appropriate aftercare. It will blow out if it’s too deep, causing all the lines to blend and feather out. The ink won’t stay at all if it’s not deep enough. Lack of adequate aftercare can result in common issues like infection and inflammation, which hasten the tattoo’s premature fading. Your tattoo will be less likely to become infected if a qualified artist does it, and they will also give you suitable aftercare recommendations. However, if done by a novice, there’s a reasonable risk they’ll utilize unkempt or contaminated equipment and add to the infection later.
5. Is it Possible to Remove a Stick and Poke Tattoo?
It is possible to get a stick-and-poke tattoo erased. You’ve come to the right place if you’re considering getting rid of your tattoo. Our Picosure laser tattoo removal can partially or entirely remove your tattoo at the Laser Skin Clinic in Richmond Hill, Ontario.
Conclusion
Stick-and-poke tattoos may be truly fascinating and beautiful with the right design and proper application. Every stick-and-poke tattoo is distinct and has a distinct artistic vibe; if you’re considering getting one, be sure to gain a thorough understanding of these inks and the tattooing process. Of course, you should always seek expert advice and make an appointment before getting a tattoo.
If you’re looking to get a stick and poke laser tattoo removal, please fill out the form at https://laserskin.ca/